The real victory, other than Siwat moving into adulthood happy and healthy, was the co-founding of Recoup.

/EIN News/ — New York City, NY , Feb. 13, 2021 (GLOBE NEWSWIRE) — Some people are lucky enough to live a life of purpose and come full-circle back to a pivotal place from the past. This circumstance is true for Siwat Siengsanaoh. However, his journey back in time was to a place of both heartbreak and triumph.

Featured in a 1983 New York Times article about growing up in a children’s hospital, Siwat was one of the success stories. Coincidentally, later in life, he found himself working a summer internship at the same hospital with some of the same doctors who helped him decades earlier.

The real victory, other than Siwat moving into adulthood happy and healthy, was the co-founding of Recoup. Recoup is an immune-boosting, ginger-based health drink derived from his mother’s home recipe. She used to make this concoction to soothe Siwat’s digestive discomfort and other aches and pains as a child. What’s even more amazing, Recoup is now sold in that same hospital system, offering patients and health care workers a daily dose of resilience. Does all of this sound like a tall tale too unbelievable to be true? Let’s put the pieces together and learn more about Siwat Siengsanaoh and Recoup.

Siwat’s childhood was plagued with illness. He spent three years in a hospital where he endured ten significant surgeries before age twelve. And it was the despair and hopelessness emanating from the hospital walls that prompted a New York Times article featuring Siwat in 1983.

For a parent, there is nothing quite so agonizing as a sick child. So, Siwat’s mother made him ginger-based ‘medicine’ to quell his nausea and inflammation. These drinks also seemed to assist in digestion and repair his overall health. Siwat’s illnesses, his mother’s devotion, and his strong desire to get well had a lasting impression on him as a child.
Learning his passion

These early experiences made Siwat extremely interested in health, wellness, and helping others. In graduate school, he studied Applied Physiology at Columbia University in the evenings while working during the day at the same hospital where he lived for three years. Upon graduation, Siwat continued his career at New York Presbyterian as a full-time staff member for 11 years. There, he was working side-by-side with some of the same doctors who cared for him as a child, caring for children plagued with heart and lung disease. This experience was one of those life-directing beacons that assured Siwat that his life’s work would be helping people.

In college and after, Siwat loved inventing and bringing ideas to life. His inquisitive mind always found it necessary to produce a tangible product to better understand his ideas and build from them. It’s this character trait that makes Siwat a serial entrepreneur. Yes, that’s right. Recoup is far from his first entrepreneurial venture.

Even during this burst of creativity and development, Siwat knew his focus — helping people. When co-founding Recoup, he started with the same soothing ginger recipe his mother gave him as a child. With some alterations here and there and co-founder Susan Buckwalter’s influence, Recoup was born.

Connecting with the missing puzzle piece

A mutual friend introduced Susan, an avid athlete, and Siwat. Susan’s background in brand innovation for natural products made her the puzzle piece Siwat was missing. Knowing ginger’s medicinal properties, Susan was intrigued by Siwat’s unique health drink. And she much preferred the taste compared to other sugary recovery drinks. After meeting, it wasn’t long before Recoup was founded, bottled, and marketed in New York City.

Siwat says Recoup’s success and his whole business model is built on three core philosophies: be balanced, be real, and be connected. For him, these values are applied to every aspect of his life, and they have helped him develop a purpose and a passion for helping others.

How is Recoup different?

So, how is Recoup different than all the other recovery drinks? Recoup was developed from a tested home remedy and scientific research to promote wellness and recovery of stressed body systems. Every bottle of Recoup has the amount of ginger clinically proven to support muscle recovery, digestion and immunity. Unlike sugary sports drinks it suits the health-conscious, not just the sports-minded. “We wanted to create something that can be enjoyed after exercises like barre, Pilates, and yoga that felt like a continuation of the physical self-care that comes with workouts,” says Susan. “The ginger in Recoup not only has proven health benefits, but it also adds another dimension to the drink, a little spicy warmth that feels restorative and brings greater body awareness. Our focus wasn’t to invent another sugar bomb to chug after football practice. It was to develop a clean, refreshing, 100% natural ginger-powered beverage for health, hydration, fitness, and wellness.”

Siwat and Susan use only all-natural ingredients when making Recoup.

“We created Recoup based on the values by which we live and aspire to live.” Says Susan.
“Being real is relevant not only to how we think about our ingredients, how to we value honesty and authenticity. Being balanced recognizes that wellness comes from a combination of habits, not a strict set of guidelines. Lastly, “being connected” honors the importance of our relationships to ourselves, each other and the Earth. Being connected means being aware of the ingredients you put in your body and how they are sourced.

From an infant and toddler who was so sick he spent years in a hospital to a passionate entrepreneur, Siwat Siengsanaoh and his business partner Susan Buckwalter are throwing the sports drink industry a curveball. All-natural Recoup with no preservatives, GMOs, or processed sugar aims to do more than promote muscle recovery. Created from the soothing ginger-based drink Siwat drank as a sick child, Recoup works as an immune-boosting elixir that tastes great.

Siwat has come a long way from being that feeble child confined to a hospital bed; however, his passion might not have developed without that experience. Reconnecting at the same hospital where he spent so many desperate days brought him full-circle — matching his experiences to his passions. This event and all of its counterparts ultimately developed into a genuine inclination for helping people. And, of course, it also led to the launch of his unique and healthy recovery drink, Recoup. 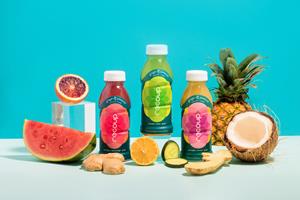 A Founder’s Unlikely Story of Survival and Success


EIN Presswire’s priority is source transparency. We do not allow opaque clients, and our editors try to be careful about weeding out false and misleading content.
As a user, if you see something we have missed, please do bring it to our attention. Your help is welcome. EIN Presswire, Everyone’s Internet News Presswire™,
tries to define some of the boundaries that are reasonable in today’s world. Please see our
Editorial Guidelines
for more information.