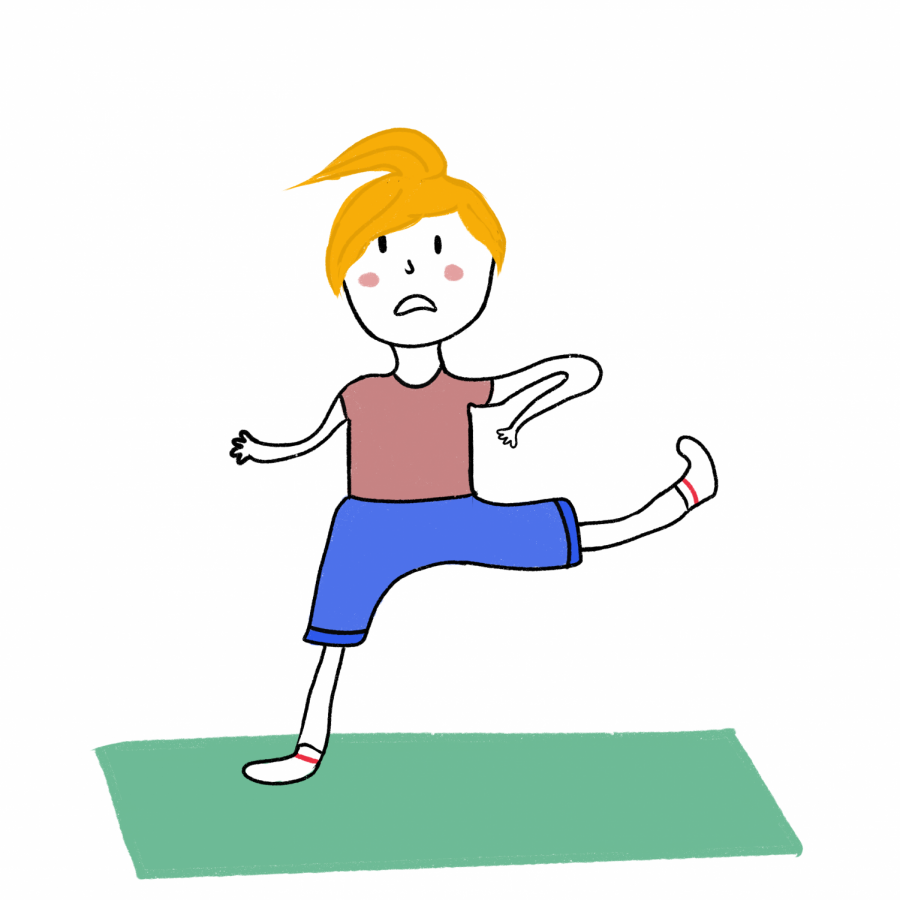 I — unlike Pitt’s current operating status — am not flexible. My high school gym teacher cackled when I did the sit and reach test. She thought it was funny that I wanted to satirize standardized fitness exams, but told me she would let me go again, “for real” that time.

I gave running a try last semester, but it is simply too cold for that now. As a result, I am embarking on the follow-up that nobody asked for. If this column was a video, it would be a skin care routine video that no one actually requested.

To finally give you what nobody wanted — let’s talk about yoga.

I started my yoga journey in the morning. I am not a morning person — I just needed to start early, so I didn’t talk myself out of doing yoga during the day. Despite having a yoga mat on hand, I am not a yoga aficionado by any stretch of the imagination.

My purple yoga mat looks like a Triscuit cracker because of how thin it is. The mat is thinner than a lasagna noodle, my will to live and white men’s pencil legs. Suffice to say, it’s a glorified piece of notebook paper that I like to call a yoga mat.

The mat reminds me of my momentary quarantine fitness kick. I thought that the extra time on my hands meant I could work on growing a six-pack that has never seen the light of day in my 22-year existence.

I got past that phase faster than people grow out of their emo, studded-belt phase — or maybe that was just me. Regardless, I rolled the mat up not long after my face decided it wanted to embrace the floor, and I slammed my head on the ground during a side plank with Chloe Ting.

This mat has a lot of memories despite the fact that I have literally almost never used it. Regardless of the hidden demons lurking around my mat, I trudge to the closet. It is sitting in the corner, looking at me like “so you really wanna do this?”

I can’t tell if I actually want to do yoga anymore. I mean, have you ever seen a cardboard box do downward dog? If you answered yes, I want whatever you’re having.

Still clad in my pajamas, I pull my glorified notebook paper out of my closet, and lay it out. It’s the moment everyone was waiting for. The runners are at the starting block, the checkered flag is about to be waved, Michael Phelps is doing that thing where he slaps his back with his extremely long arms. I kneel on the mat and open my computer — it is time.

The video isn’t what you think it would be. If you’re me, you see yoga through a really westernized lens. It’s granola people doing deep stretches, and then getting a green juice after. Contrary to what many people think, yoga did not originate at Lululemon or Yoga Factory.

I know your yoga instructor Alyssa has great routines for weight loss and core focused yoga, but yoga goes beyond a simple workout. There are four types of yoga, and not all of them are about doing cat-cow and working up a sweat.

I realized the depth of spirituality in yoga when my session started with a prayer. The instructor from my video talked in a sing-song voice, and told me to “relax my face.” Although this was beginners’ yoga, I found my limbs shaking half way through. Even though I couldn’t bring the same grace, poise and body control to the movements, I did enjoy my time trying yoga.

I looked like Courage the Cowardly dog trying to find inner peace. But to the credit of my instructor, I was so relaxed during shavasana that I did not realize that my WiFi was buffering for over five minutes. I just laid there thinking “wow they really edited this smoothly to incorporate complete silence while we finish the class.”

When I turned over to see the spinning circle over the video, I realized that it was a technical mishap instead of video editing genius. Intentional or not, yoga allowed me to feel clear minded. It was different from running because I didn’t taste metal in my mouth, and the clear mindedness I got from yoga didn’t come from my organs pleading for water.

Instead, yoga made my muscles feel personally attacked. They hadn’t been stretched in months and all of the sudden yoga busted down the door and decided to bring strength and elongation to them.

I did not get a green smoothie after completing yoga for the morning. Instead I took a bite of a protein bar, saw my reflection in the mirror and realized yoga and a protein bar was almost too much health for one day. At the end of the day, it’s still me, and I just really wanted a donut.